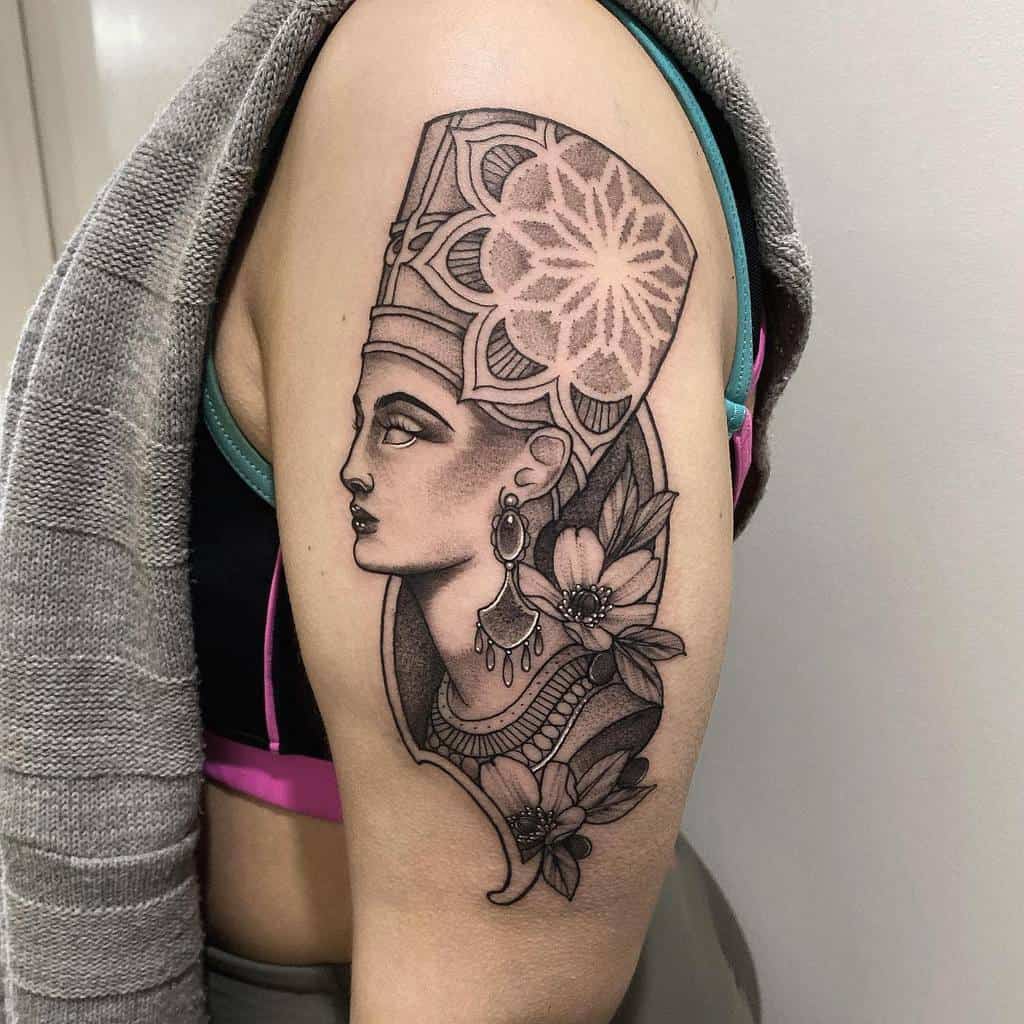 Queen Nefertiti ruled alongside the revolutionary Pharaoh Akhenaten and has been described at different times as “the most beautiful woman in history.”

One of pop superstar Rihanna’s most famous tattoos is the bust of the Egyptian Queen Nefertiti along her ribs. Rihanna is just one of millions with an abiding interest in Nefertiti and other powerful figures from Antiquity.

Read on for a selection of 97 awesome Nefertiti tattoo design ideas. Towards the end of this tattoo gallery you’ll find handy FAQs that may help you narrow down the choices for your next tattoo idea.

2. Nefertiti Back and Shoulder Tattoo Designs

9. Nefertiti Side and Chest Tattoo Designs

What does a Nefertiti tattoo symbolize?

The name Nefertiti means “The beautiful woman has come.” She rivals Cleopatra as the most famous Queen of Ancient Egypt and is often the focus of tattoos celebrating beauty, feminine strength, power and devotion.

Part of Queen Nefertiti’s fame is due to the discovery of the bust above at the workshop of royal artist Thutmose in the ruins of Amarna. Now housed at the Altes Museum in Berlin the bust is a truly amazing piece of art supporting the description of her as one of history’s most beautiful women.

Finding the mummy and tomb of Nefertiti has been described as the most important remaining mystery for Ancient Egyptian Archeologists and scholars.

What style Queen Nefertiti tattoo should I get?

Also a burgeoning type of ink design is single needle tattoo and they work beautifully for Nefertiti tattoos. These are generally quite small tattoos; however, they’re imbued with an amazing level of pinpoint black and gray detail which brings the features of Nefertiti to life..

For color Queen Nefertiti Egyptian tattoos, designs focusing on bright complementary colors, or watercolor tattoos working around a strong central outline of the Queen are most popular.

What was revolutionary about Akhenaten and Nefertiti’s rule?

Akhenaten bought Ancient Egypt under the rule of a single God the Sun Disc Aten, abolished traditional power structures and moved the capital. Unlike many Queens of Egypt Nefertiti had a strong presence alongside her husband’s divisive rule.

After Akhenaten died suddenly, Nefertiti was thought to act as regent for the boy King Tutankhamun but faded in power after his death. Following the brief rule of Pharoah Ay, Pharoah Horemheb destroyed the monuments and temples built during the rule of Akhenaten and Nefertiti and tried to erase their record from history.

Why are there tattoos of Rihanna as Nefertiti?

Many fans of the singer have paid tribute to the pop star Rihanna’s beauty and talent by choosing to get tattoos of Queen Nefertiti with Rihanna’s face.

Rihanna has a deep fascination with Ancient Egypt. One of her most famous tattoos is a black and gray profile of Queen Nefertiti. An older piece, this tattoo is rarely seen thanks to its location on Rihanna’s ribcage.

Rihanna also has an Egyptian falcon tattoo and an impressive black and gray tattoo symbolizing the strength and power of the Egyptian Goddess Isis running across her sternum.

34 Minimalist Tattoo Ideas for Both Men and...

55 Best Back Tattoos for Women to Try